(Michael) George and the Dragon

It had been a long yet productive day.  After two days of decorating, my dad (the aforementioned Michael George - see what I did there?) and I were ready for a treat.  Having been so impressed by the nearby Walthamstow Village last time he visited, I suggested we go again, and listed the various culinary options.  He fancied Italian - which was what I was secretly hoping.
You see, Operation:Pizza has yet to be concluded.
I was a bit nervous about returning to Nuovo Mondragone - last time I visited, they got my mate's order wrong, and left him waiting 20 minutes for a replacement.  Of course, by the time his meal came, I had finished mine, and I had to prompt them to offer some kind of compensation when the bill came.
But I like to think I am fair when it comes to pizza and war.
We were seated quite quickly.  The atmosphere was relaxed and family friendly - in fact the children at the table opposite were a constant source of entertainment.  We scanned our menus and decided to share some bread and olives before our main.  Dad, not being a pizza person, went for lasagne, and I decided to give Al Dragone a try - the combination of pepperoni, asparagus, dried chilli, aubergine and fresh tomato tickled my taste-buds' fancy.  Our minds made up, we waited to place our order.
And waited.
Eventually our waiter showed up and asked what we would like to drink.  Our alcoholic order given,we quickly slipped in our food before he could disappear again. 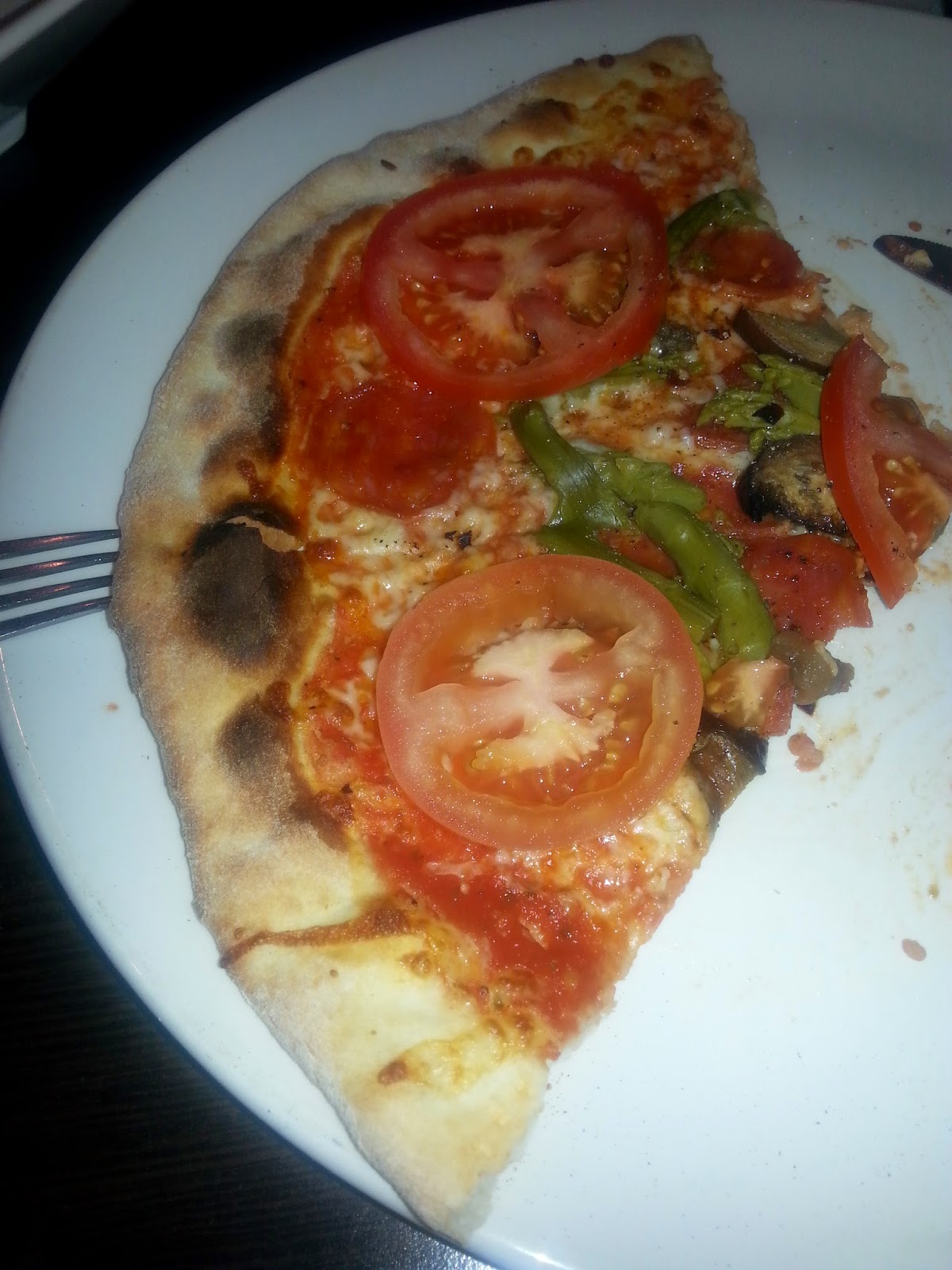 "Is the mozzarella fresh buffalo mozzarella?"  I enquired.  Sheepishly the waiter shook his head before skulking back to the kitchen.
After a slightly shorter wait, our drinks arrived, followed by our starter.  Dad really enjoyed the bread, but I was disappointed.  Yes, it was okay, but the garlic bread you get in Pizza Hut is no worse.  However, it filled a hole quite pleasantly.  Which turned out to be a good thing.
When our main finally arrived, my glass of wine was nearly empty and my napkin had begun to look rather appetizing.  My dad was offered parmesan, which he accepted.  I was not, which was all the more disappointing as the cheese was not only the cheap grated variety they use in the aforementioned chain, but rather scarce.
The pizza was okay, but, paired with the wait, failed to fill me with enthusiasm.  My easy-to-please father described his dish as "okay", which was not a great sign.  As our plates were cleared, we were offered dessert.  We declined, and asked for the bill.
15 minutes later, I asked for the bill again.
I left it another 10 before frantically waving over someone else.  Five minutes passed before it finally arrived.  My dad insisted on paying, but said I could leave a tip.  I didn't bother.
Needless to say, Nuovo Mondragone has been crossed off the list.
Posted by Shelly Berry at 14:28